Four out of five board members recalled in Ontwa Township 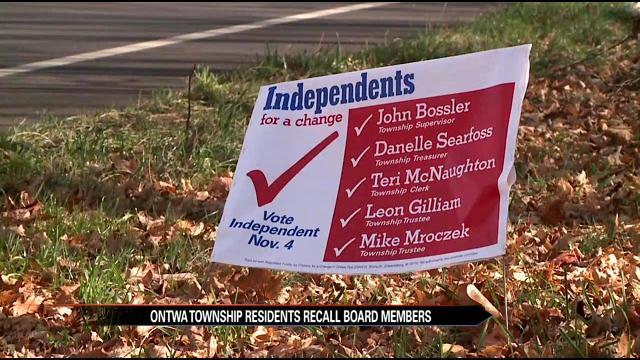 Tuesday was a big night for Independents across Ontwa Township. Independents unseated four out of five Republican township board members on Tuesday. It comes after the board began working on a controversial project to build a wastewater facility treatment in town. Newly elected Ontwa Township Supervisor John Bossler said it wasn't easy running against incumbent John Brielmaier. He said listening to the people is what got him elected.

The soon to be former township board planned to move forward with a project to build a wastewater facility treatment at Cobus Creek.

Until four out of five were recalled in Tuesday's election.

“We've been to almost all of the meetings and they're very stubborn, didn't listen. Didn't really care what the people thought. So I guess they're going to find out now,” Mary Joe Glon said.

Glon's home sits a few hundred feet from the creek.

The project would have involved dumping nearly three million gallons of treated waste in the creek, near homes and wildlife.

Stopping this plan is a top priority for supervisor elect John Bossler.

“I personally thought it was a very, very bad idea. We didn't need it. We already had a perfectly effective way to treat the waste,” Bossler explained.

Currently the township sends its waste to Elkhart city for treatment.

Bossler said the system is in desperate need of improvements, but there's no reason to spend millions on a new system.

“$8 million is a lot of money in a little town. And you were going to commit the township to paying bonds for over 40 years for a plant that would probably only last 20,” Bossler said.

Neighbors said it is a good day having newly elected leaders to better serve their needs.

“We're thrilled. Just thrilled as can be,” Glon said.

“I was very glad to see the independents win because hopefully it will put an end to this sewer treatment plan which we really don't need anyways,” said Hopper.

The new board is set to be sworn in Friday, November 7th. They said they will immediately get to work to put an end to this project.