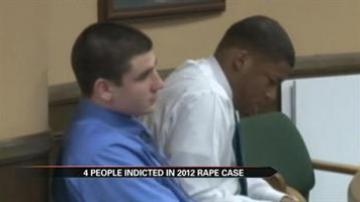 STEUBENVILLE, Ohio -- New charges were filed in connection with a 2012 rape case that drew national attention when two football players raped a teenage girl at a party.

Monday the Ohio Attorney General announced four adults including a school superintendent have been indicted by a grand jury for a list of charges including failing to report the abuse, obstructing justice, and tampering with evidence.

"While this started out being about the kids, it is also just as much about the parents, about the grown-ups, and about the adults. How do you hold the kids accountable if you don't hold the adults accountable?" said Ohio Attorney General Mike DeWine.

The two Steubenville high school football players were convicted of rape in March after pictures of the assault showed up online.

The teens are serving out their sentences in a juvenile center.