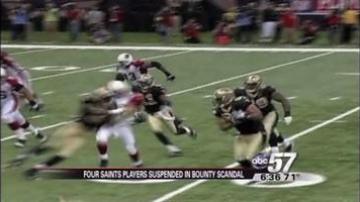 It's the latest in a scandal involving bonuses for intentionally hurting opponents. The suspensions run from just three games, to the entire 2012 season.

The NFL said one player offered $10,000 to any player who knocked Cardinals QB Kurt Warner or then Vikings QB Brett Favre out of the divisional playoff and championship games.

Saints head coach Sean Payton has already been suspended for the 2012 season.