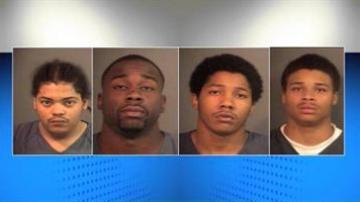 ST. JOSEPH COUNTY, Ind. -- Four men have been arrested on preliminary charges of residential entry and resisting arrest in the attempted home invasion of a home in the 22500 block of Kern Road Monday afternoon.

According to St. Joseph County Police, police were dispatched to the 22500 block of Kern Road after a resident called police about an attempted break in.

Police said the resident was upstairs taking a shower when they heard the doorbell ring. When they got out of the shower and went downstairs, the resident discovered someone had tried to break in at the back door of the residence.

Police learned the suspects fled in a dark Buick.

An officer found a vehicle matching that description near Locust Road. The car pulled into a driveway on Locust Road and the four occupants ran off.

The Goodwins were arrested at the Prairie Street Apartment Complex and Henderson was located on the property of AM General.

The residents of Locust Street did not know any of the suspects and did not give anyone permission to park in their driveway. They had no connection to the incident.