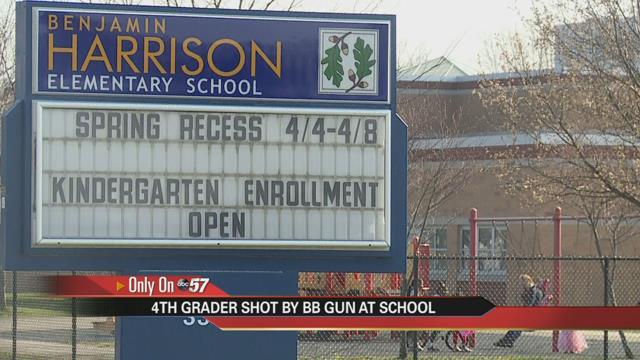 One South Bend parent is calling for action after her fourth grader was shot by a bb gun at an elementary school.

That parent tells us a police report was filed and one student is up for expulsion.

But she wants to know how this could have happened?

The student who was shot is doing fine.

The child said he was shot in the chest by another student shortly before school started, but it wasn’t until the end of the day when his mother found out about it.

“Just the fact that the gun was in the school and it wasn’t caught, teachers weren’t there, it all could’ve been prevented,” said his parent.

It was a scary phone call from her child’s school that led this concerned parent to fear the worst.

“This is sad, I could’ve been planning a funeral today, and it just really bothers me as a parent that this happened at my kid’s school and they’re supposed to be safe,” she said.

The mother of a fourth grader at Harrison Elementary School was called by administrators and told her son had been shot in the chest Thursday morning.

She says luckily, the weapon was a pellet gun.

But she wants to know how this could have happened on the school grounds.

“Kids will be kids but, there just needs to be a lot more supervision at this school,” she said.

She says her son told his teacher on the school bus while the class was headed to a field trip, but she says she was not made aware of the situation until the end of the school day.

“Hearing that phone call right when i know I’m getting ready to pick him up and just that word shot, no mother wants to hear that,” said the parent.

She says the student who shot her son has been removed from school and is up for expulsion.

And while she’s happy the school took action, she wants them to take even more precautions so this won’t happen again.

“Monitor and keep track of everything. There should’ve been teachers out there and I really think that back packs need to be checked,” she said.