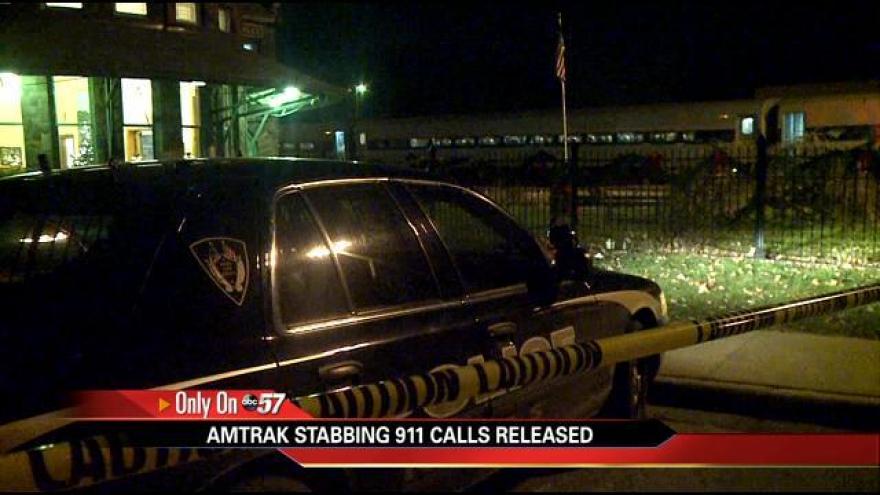 NILES, Mich. -  A terrifying night began to unfold twenty-five days ago, aboard an Amtrak train.

On a Friday night, December 5th, it was traveling from Chicago to Port Huron when it pulled into the historic Niles train station and four people on board were stabbed.

Michael Darn ell Williams, a Saginaw-native, is locked up right no now .accused of attacking the train conductor and three passengers.

Only Abc57 news the public is hearing the frantic 911 calls from that harrowing night.

“We are in Niles, at the Amtrak station. There's a guy stabbing people. I was stabbed already. We jumped off the train to get away,” said a victim as she called 911.

She said she jumped to her safety, because, to her, it was a matter of life or death.

After the Amtrak train pulled into the Niles train station, 911 calls came pouring in.

“Hey, we have on the Amtrak train. We have a woman who was stabbed. We're in Niles. Get some help here now!” said another caller desperate for help.

They were stabbed, allegedly by Michael Darnell Williams, and he would later tell a judge he saw a demon and reacted.

The 172 passengers on the Amtrak train from Chicago to Port Huron did not know what to do.

“Operator: what is the passenger doing? Caller: he's being a little disgruntled,” was another 911 call.

That call is from the Chicago Amtrak station giving Niles Police Department a heads up of a passenger acting strangely.

That night police said it was that call that made sure officers were on the scene prior to the train arriving that may have saved many lives.

“There's an assistant conductor, last name is Bankhead,” said the Amtrak employee on the phone.

Amtrak told police to be in contact with Conductor Dontreal Bankhead, but he would later become one of Williams' victims.

“He is like killing people. I mean it's bad,” said another caller.

The whole ordeal seems like it was ripped from a Hollywood horror script.

While those victims were carted off by ambulances, police used a taser gun to stop Williams from his rage.

“He's on the floor, being subdued by patrol,” said a caller.

The Berrien County Prosecutors Office said Michael Williams will go before a judge again on February 23rd for a competency hearing since he has been allowed a competency exam.