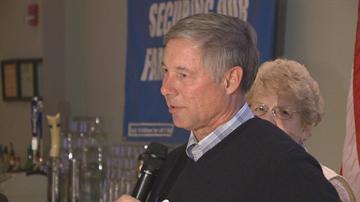 ST. JOSEPH, Mich. – In what many thought would be a close race, Representative Fred Upton (R - 6th District) won his 14th term in Congress beating out Democrat Mike O’Brien.

Upton was upbeat when he spoke to supporters saying that he anticipated a tough road ahead for congress as the country grapples with economic problems.

“We’ve gone through some pretty tough times in Michigan and we know that we have enormous challenges down the road,” Upton explained.  “Not only for Michigan, but also for the country.”

Upton said he was concerned about the looming fight in congress over the “fiscal cliff,” the coming deadline when $100-billion in automatic cuts and a raise in taxes of around $400-billion would take effect.  In the past year Upton served on a bipartisan committee of house and senate members who attempted and failed to come up with an agreement to make $1.5-trillion in cuts and set in motion the “fiscal cliff” problem.

“It really is time to set aside our differences and work together,” Upton said.  “Regardless of who the next president is, we have to do that.”

Upton said he planned to return to Washington next Tuesday.