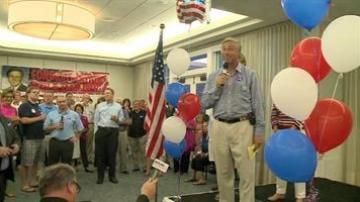 ST. JOSEPH, Mich. -- In one of the biggest races of the election, incumbent Fred Upton earned the Republican nomination for the US Representative for Michigan's 6th District.

His opponent, Jim Bussler, thought it was time for a change.

But with over 20 years experience, Upton won the spot on the November ballot.

"No campaign is easy, and I am honored to be the Republican nominee for U.S. Congress," said Upton.

Upton said the win is in large part thanks to his supporters and his voters.

In the past, fewer than 25-percent of registered voters in Michigan made it to the polls.

Officials are optimistic that this year was different.

"I think a lot of people do neglect the primaries because they don't feel it's important but that doesn't allow the best candidate to be there when it comes to November," said voter Jill Ridell.

But when the primaries set the stage for November, they may be more important for Michigan residents.

"It's really important for people to turn out because it will determine who is really going to be on that November ballot," says Tracy Tiffany, the Co-Chair for Precinct 1.

Officials in Berrien County say turnout wasn't bad for a primary election, and that the competitive races and hot issues on this ballot helped bring out passionate voters.