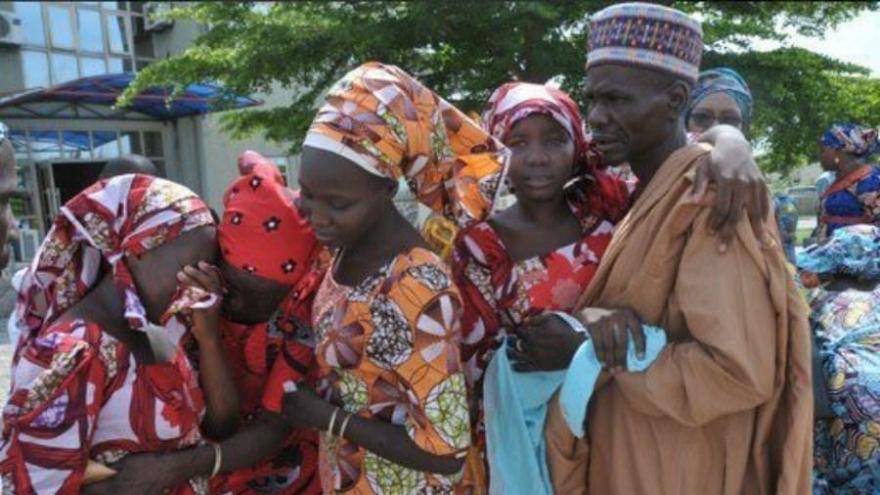 (CNN) -- The 82 Chibok schoolgirls recently released by Boko Haram were reunited with their families Saturday, the Nigerian government says.

The former captives, now ages 18-21, are believed to have been among the 276 pupils forced from their beds by Boko Haram militants in the middle of the night in April 2014.

The kidnapping from a boarding school in the town of Chibok sparked global outrage and the social media movement #BringBackOurGirls.

The young women were reunited with their families during a ceremony in the capital Abuja, the government said in a statement. It released images showing the girls and their relatives hugging, crying, dancing and praying together.

After receiving intensive medical attention, the young women will be enrolled in a remedial program that will prepare them to go back to school, Minister of Women Affairs, Hajia Alhassan, was quoted as saying in the statement.

The schoolgirls appeared to be in generally good physical condition when they were greeted by government officials at Abuja airport two weeks ago. But Nigeria's information minister, Lai Mohammed, told CNN then that one had a broken arm and another a leg injury.

CNN has visited the facility where the schoolgirls are beginning their road to recovery. The complex on the outskirts of Abuja already houses 21 former captives freed by Boko Haram last October, in a deal brokered by an unnamed Swiss contingent and Nigerian authorities.

The young women staying there erupted into applause at the news that they would be joined by the 82 recently released girls.

Their release takes to 106 the number freed by the militants so far, the government said.

Fifty-seven schoolgirls managed to escape the militants soon after their capture, while two others were found by the army. Another girl was found in May 2016 when she wandered out of a Nigerian forest asking for help, according to witnesses.

Discussions to free the remaining 113 girls were expected to begin late last week.

The government freed five top Boko Haram commanders in exchange for the most recent release, Sen. Shehu Sani, who was part of the negotiating effort, told CNN.

"There's no price too high to pay," Sani said.

The International Committee of the Red Cross said that it helped facilitate the recent release, tweeting May 7: "Acting as a neutral intermediary, we @ICRC transported 82 #ChibokGirls to the government of #Nigeria" and included a photo of six Red Cross SUVs on a dirt road.

"(Given) our long historical independent neutral stance, it's common for us to be the middle man in hostage releases," said Jason Straziuso, spokesman for ICRC for East Africa. "We provide transportation from Boko Haram to the Nigerian government."

"We will continue to meet with the girls and monitor their health," Straziuso said. "Our concern for the girls' well-being will continue in the coming months."

Boko Haram, which pledged allegiance to ISIS in March 2015, aims to impose a stricter enforcement of Sharia law across Nigeria.

The group also refers to itself as Jama'atu Ahlis Sunna Lidda'awati Wal-Jihad, meaning "People Committed to the Propagation of the Prophet's Teachings and Jihad."

Nigeria is Africa's most populous nation and has a Christian-majority south and a Muslim-majority north.