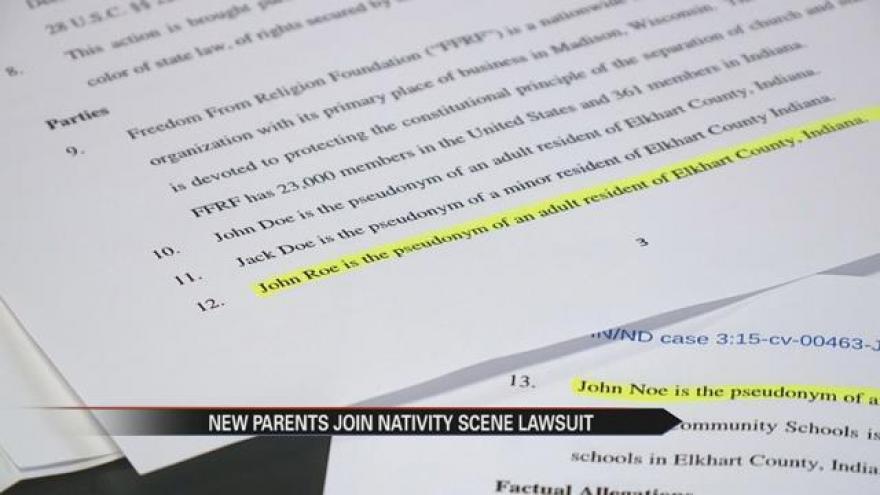 More people are joining a lawsuit that has a school district divided.

In 2015 the Freedom from Religion Foundation was contacted by a parent in the school district.

In August 2015 the FFRF requested the district remove a live nativity scene from its holiday concert and eventually a lawsuit was filed.

During the 2015 holiday spectacular mannequins replaced students who acted out the religious scene in the past.

On Sunday 14 pages of an amended complaint were filed in the United States District court in South Bend.

The biggest change to the original lawsuit filed in 2015, two new parents have come forward opposing the nativity scene in the school district’s Christmas Spectacular show.

“They became aware that the law suit had been filed and that FFRF and the ACLU were planning on taking action to end this constitutional violation and they felt like they needed to be a part of that,” says Sam Grover a Staff Attorney with Freedom from Religion Foundation.

John Roe and John Noe are the anonymous parents and they fear threats.

Some violent comments towards those against the nativity scene have been posted on the ‘Save Concord’s Christmas Spec’s Nativity Scene’ Facebook page.

The page was started by parents who want to save the live portion of the show.

Administrators of the page are working to filter the negativity

“We take this very seriously and we want all the family involved who have young children within the school district to be protected,” says Grover.

He filed this police report with the Elkhart County Sheriff’s Department.

“We had until the end of the year to dismiss our case or else they were going to cut me up and feed me to the fishes in the Elkhart River,” says Grover.

Receiving this threatening saying ‘no one will stop me’ and a six-month battle were not what Grover and the families were expecting.

“We hoped the school district would simply do the right thing and adopt a mutual stance toward religion as it is require to do under the constitution,” says Grover.

The school district has not responded to emails sent requesting a statement regarding the amended complaint filed against them.