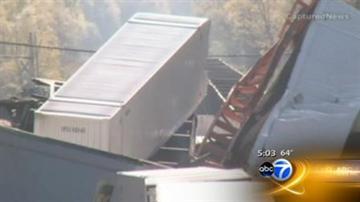 GARY, Ind. - Fire officials in Gary responded to the scene of a freight train derailment at Miller and Hobalt roads Sunday.

Dozens of train cars went off the tracks into the Miller neighborhood.

According to the Chicago Tribune, firefighters had to extricate two people, including a crew member who had a broken leg.

The cause of the derailment was not known Sunday.