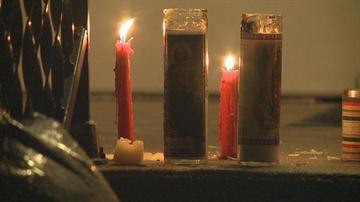 SOUTH BEND, Ind. – A close friend of Alejandro Tinoco, one of the victims of Wednesday night’s shooting at the corner of Adams Street and Vassar Avenue, said on Thursday that Tinoco had been taken off life support after being in critical condition since the shooting.

Tinoco and Jazmin Conlee, both 19-years-old, were shot at their home on the 1100-block of Adams Street.

“I know they pulled the plug on Alex (Alejandro), I hope that Jazmin makes it,” explained Cammie Smith, a friend of both victims. “They don’t deserve to die, they’re way too young.”

Smith and other well-wishers placed dozens of candles on a shrine supporting Conlee and Tinoco on the front porch of a home down the street from the shooting scene.

“I just came to show my respects, light a candle, say a prayer, I’ve been praying for them for the past two days,” Smith said.

Smith explained that she’s known Tinoco for years. She described him as a talented artist with dreams of becoming a tattoo artist.

“He was a really good friend of mine, I’ve known him for years, since middle school,” Smith described.  “He did the tattoo on my chest, he’s really good at tattoos…I was just with him on Sunday, talking about tattoos.”

Smith said family members told her that Jazmin Conlee is still on life support and breathing.

St. Joseph County Metro Homicide Detectives released little new information on the shooting on Thursday and haven’t provided an official update on the condition of Conlee and Tinoco.