From nasty to neat; illegal dump site cleaned hours after it shows up on t.v. 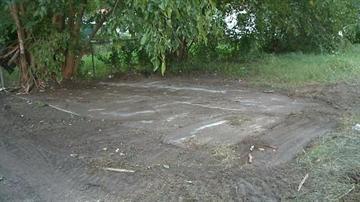 SOUTH BEND, Ind. – Less than 24 hours after Lorraine Harper talked with ABC 57, South Bend city workers were cleaning up a mess that had been growing for more than four months. It took heavy equipment, several workers, and more than one truck-load to remove the debris.

Harper was returning home around 8:00 a.m. when she saw city workers and the equipment preparing to dive into the mess. She says the sight lifted her spirits. “I compare it to something you’ve asked your husband for forever, and it’s like he’s not paid any attention to you and out of the clear blue sky it materializes. So, I just cannot say how thankful I am that it’s gone,” said Harper.

But this clean-up didn’t materialize out of the clear blue sky. Harper spent four months making telephone calls the city; first to code enforcement then, later, to the Mayor’s office.

It reached a point where Harper says she felt she was being ignored. So she contacted her city council member Henry Davis, Jr. who put her in touch with ABC 57. “If it had not been for the both of you, I would still be miserable,” said Harper.

Despite our coverage, this situation was known by someone at the city. According to a spokesperson in the Mayor’s Office, solid waste was notified about the issue at some point in the past; though an exact date was unavailable.

We also talked to Gary Libbey, who was asked to speak with us on behalf of the Code Enforcement department, because the director Catherine Topple was unavailable. Libbey told us, sometimes these issues fall through the cracks.

Libbey says, clean-ups after big summer storms can push other jobs to the back burners. He also says there are only four people in the department responsible for cleaning stuff like this up. “Four people to clean up 40,000 - 50,000 pieces of property in the city can get time consuming, especially in the summer when illegal dumping is on the rise,” said Libbey.

Libbey goes on to say Harper was doing the right thing, by continuing to call about the problem and that other residents are encouraged to do the same. He says, it’s their job to take care of problems like this and residents should never feel as though they are bothering code enforcement when calling to report issues like illegal dumping.

According to Libbey, the property owner will most likely get the clean-up bill because the dump was on their land. Though, he mentioned that inspectors will often go through items illegally dumped looking for items that will lead them to the people responsible.

Meanwhile, Harper is just happy the trash is gone and; she hopes the people who have been dumping recently will recognize that it will not be tolerated any longer. “Hopefully, this is the beginning of a neighborhood gone right,” said Harper.