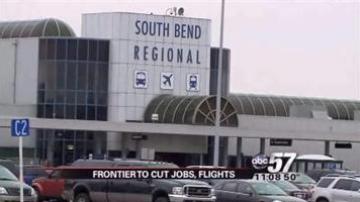 According to reports, the carrier is expected to hack at least 220 jobs. It's supposed to reduce flights and cut the number of seats. The reductions are expected to be at Frontier's primary hub airports in Denver and Milwaukee.

In September, the feds gave South Bend Regional Airport over a million dollars to improve airline service, and it was planning to give about 475,000 to establish round trip flights to Denver via Frontier Airlines.