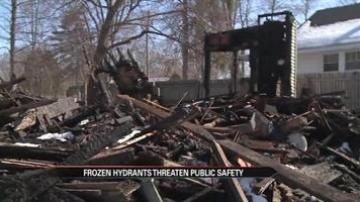 BENTON HARBOR, Mich. -- While fighting a fire over the weekend, firefighters in Benton Harbor were unable to use water from a hydrant right across the street from the burning house on Ogden Avenue because the water was frozen. A neighbor recorded their frantic search for water on a camera phone.

Corvetta Merady's sister lives across the street from where the fire happened.

"It was flames everywhere," said Merady.

Even though there was a fire hydrant across the street, firefighters had to run around trying to find a hydrant that wasn't frozen.

They ended up bringing in tanker trucks full of water.

"They had to use the hose off the fire trucks," said Merady.

Neighbors say firefighters did everything they could to get water to fight the flames.

We tried contacting firefighters but they were busy fighting another fire and haven't gotten back with us.