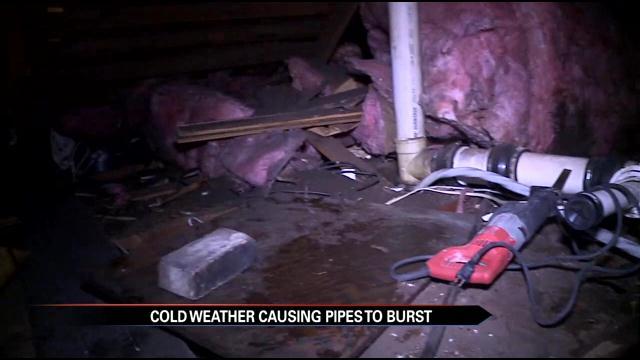 This bitter cold snap is putting homes at risk of having frozen pipes.

ServPro in Berrien County and ABC Preferred Plumbing said they've been receiving dozens of calls. Brett Bailey, the master plumber, was working at a home on Michigan Avenue in St. Joseph on Friday.

Bailey said, “What happens in the winter time is that adverse conditions always reveal flaws in a home. Or even in a person and what we have here is a ridge vent which will stop the rain and all, but when you get below zero weather and the snow blowing it has a tendency to blow snow in the house. This was an edition put on the secondary roof in here. You can even see the snow in the secondary roof here!”

The homeowner said when the pipe burst it flooded the attic.

Joe Sparks said, “About 11:15 last night, I heard water running, I came downstairs and there was a torrent of rain coming out of the ceiling in the kitchen!”

Sparks said this pipe rupture has been a nightmare, and Bailey found a leaking sewer line while he was up there.

Bailey said, "We're replacing part of his waste line coming from his toilet. It was split on the bottom, and there were icicles underneath it!”

Bailey said these record breaking temperatures cause all types of problems.

Bailey said, “If you glued this fitting, you'd have to wait for a long time for the glue to cure!"

The homeowner said he was awake for 12 hours cleaning up all the water. The owner of the ServPro franchise in Berrien County said you need to be careful, but homeowners can use a space heater to warm up pipes under a sink.

Kris Popp said, “One of the best things to do is to leave your water running at a trickle. That will prevent your pipes from freezing another good thing to do is to open up your cabinet doors where you have water pipes underneath them so that the warm air can get in!”

He also said it's important to turn your water off if you are leaving for more than 24 hours.