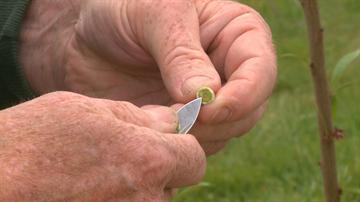 BERRIEN COUNTY, Mich. – No one likes fruit that’s gone brown, especially Michigan growers. The most recent frost in the area has taken a bite out of the Michigan fruit crop. One farm said it lost 95 percent of its fruit crop this season.

Fruit Specialist Bill Shane with the Michigan State University Extension walked through rows of peach and cherries tress on Tuesday.

"Occasionally I can find a good one, but you can see but this should be just loaded with sweet cherries," said Shane. "You can see in this group here, there’s only one out of the four that looks to have any sort of size to it."

Shane said that the recent frost has left crops with only a fraction of what they started with, and it’s a problem statewide.

He said that the abnormally warm temperatures this spring caused the fruit to bloom early.

"If we move the temperatures warm early, then the crops develop, and we have the frost and then we see this type of decline," explained Shane.

A steep decline that is, in nearby Coloma, the owner of Fruit Acres Farms said last Thursday’s frost cost him 95 percent of his fruit crop.

This includes everything from apples, peaches, pears, cherries, and apricots.

The owner added that things had been "good" until Thursday night when temperatures stayed at 24 degrees for four hours.

This year’s blooms that are farther advanced than normal, just can’t survive those freezing temperature.

"Cut into that," said Shane as he holds a peach blossom. "You can see the inside of that is brown, that’s a peach that will drop off the tree in a week or two," he said.

Shane said the first place people will notice the lack of fruit, is in the shipments.

"People may not see as much shipped to them out of Michigan because that’s the first place where we see when we have low crop that we don’t ship near as much fruit out of Michigan," he said.

He said it will also affect the grower, the people the growers hire, and it just goes on from there.

"There’s quite a ripple affect out of it and quite a significant deal for Michigan," said Shane.

So now he said growers should focus on keeping things green next year.

Shane added, "Keeping the trees in good shape so that next year’s crop will be a good one."

He said while things are bad now, next year’s crops should be great because the plants are getting an entire season of rest.

So maybe things are greener on the other side.