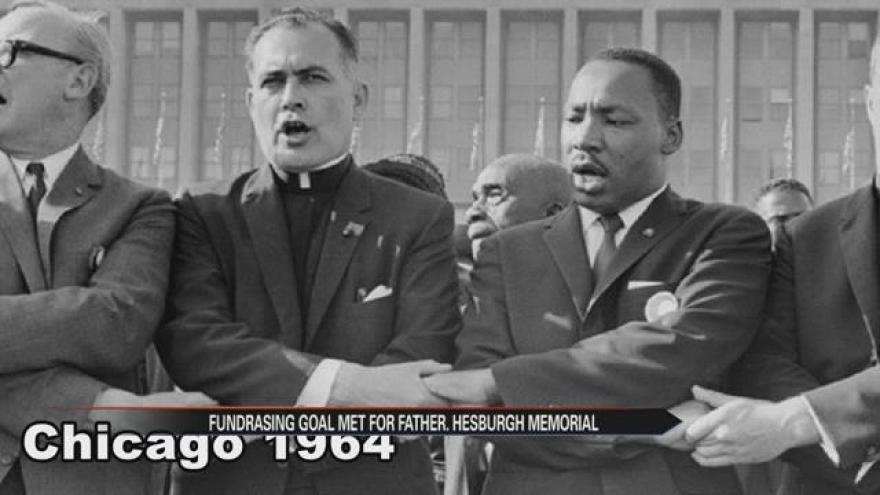 “It has a lot of momentum, a lot of potential, it’s lacking public art, and this is an opportunity to add public art into downtown,” said Jitin Kain, South Bend’s Deputy Public Works Director.

A spot in the Leighton Center in downtown South Bend is officially soon to be the home of a historical statue dating back to the 1960’s.

“We’ll be moving the medallion and that’ll become the base,” said Kain.

Back in August, the City of South Bend announced that a local sculptor had been commissioned to create a $240,000 monument of Dr. Martin Luther King Jr. and Father Hesburgh who served 35 years as President of Notre Dame. The statue is meant to depict the famous photograph of the two hand in hand while singing “We Shall Overcome” at a civil rights rally in Chicago back in 1964.

“After father Hesburgh passed away, there was a desire to find a way to commemorate his legacy and so I think that developed into ‘how do we use this iconic picture of him and Dr. King?’. And so that’s how it evolved into being a life-size monument,” said Kain.

City officials noted that if $20,000 could be raised by the city through a crowdfunding campaign for additions like lighting, a water fountain, tables and chairs, the Indiana Housing Community Development Authority would match it with another $20,000.

Tuesday morning, that goal was reached.

“It’s a way to cement the legacies of these two great individuals. Father Hesburgh certainly had a great impact at Notre Dame but also our community and nationally and then obviously Dr. King has had such a tremendous impact on civil rights,” said Kain.

Since all the money has been raised, the unveiling for that monument is set to happen at the end of June. Kain says the city will announce that exact date when we are closer to it.