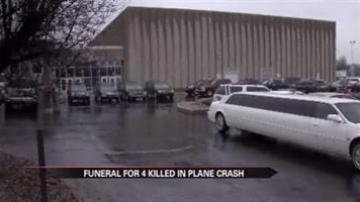 The two couples who were on board were remembered Friday. Donald and Barbara Horan and their friends Stephen and Denise Butz died Sunday night.

As they were approaching the Greensburg Airport, amid heavy fog, their plane crashed.

Friday's funeral mass was held this morning at the Greensburg High School gym.