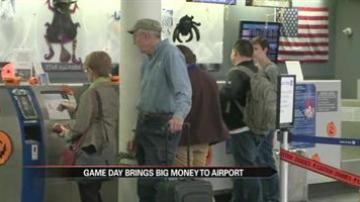 SOUTH BEND-- It has been the talk of the town all week long, Notre Dame taking on the USC Trojans. But going beyond the final score, what do game days mean for the city of South Bend?

Director of Marketing and Development at the South Bend Airport Julie Curtis said, "This is so far our second biggest Notre Dame home game for the season."

It was more crowded than usual at the South Bend Airport because of the game.

"We had additional flights come in from Delta and United and we also have on the ground right now 120 aircraft at Atlantic Aviation," Curtis said.

Those additional aircraft are private planes.

But commercial airlines still had to make accommodations for the high volume of flyers.

So what does all this mean for the airport and the entire city of South Bend?

Money. Lots and lots of it.

"Notre Dame football has an $18 million impact – each game does on the local community," Curtis said.

Hotel managers like Jay at the Sleep Inn near the airport are seeing it first hand.

He said on game days business could not be better.

Pat Harrison who is staying at the hotel, traveling from Springfield, Illinois said, "There’s nothing like watching a game at Notre Dame which many people see as the icon of football."

Curtis at the South Bend Airport said the Notre Dame –Oklahoma game was their biggest of the year so far with 220 private planes in addition to commercial flights landing here.