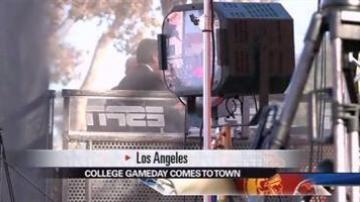 LOS ANGELES -- ESPN's College GameDay returned for another Irish game. This is the third time this season that the EPSN sports show has appeared at a Notre Dame game.

There was a large crowd of Irish and Trojan fans on hand for the show.

But some USC fans think that the Irish have the game firmly in hand.