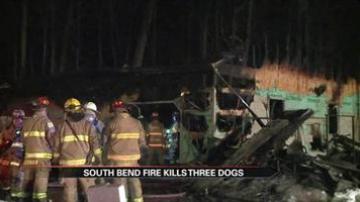 SOUTH BEND, Ind. -- A late-night garage fire in South Bend killed 3 dogs and did thousands of dollars of damage before being put out. It happened around 11 p.m. Monday night in the 20000 block of Roycroft Drive.

Several area fire crews responded, including Penn, Warren and Lakeville, all of which were called to the scene by Southwest Central Fire Territory to assist with putting out the flames.

When crews arrived, the fire had already fully engulfed the garage and was quickly spreading towards the house.

"We didn't want to lose the house," says Fire Chief Terry Korpal of Southwest Central Fire Territory. "The garage was already a total loss, so it didn't make any sense to spend our time on something that was destroyed. We decided to concentrate our efforts on the house."

Crews were able to get extinguish the fire before it did major damage to the house, only allowing it to melt away some of the vinyl siding off the home.

The garage owner says the dogs were Basset hounds that belonged to her friend. He kept them in the garage after rescuing them from an animal shelter to keep him company while he worked on her car.

She says he'd travel from Bremen each day to work in the garage, so he stored a majority of his tools and car parts there.

The owner kept a 1968 Cadillac El Dorado coupe inside of the garage.

She says she purchased it and had it shipped here from California for her dad years ago. He got to enjoy it for a couple years before passing away from leukemia.

She and her friend were working on restoring the vehicle in hopes of showcasing it in an auto show before the fire happened.

Investigators are still looking into what caused the fire, although the owner's friend admits he left a lamp on that he believes may have started it.

The owner says she has insurance on the garage.