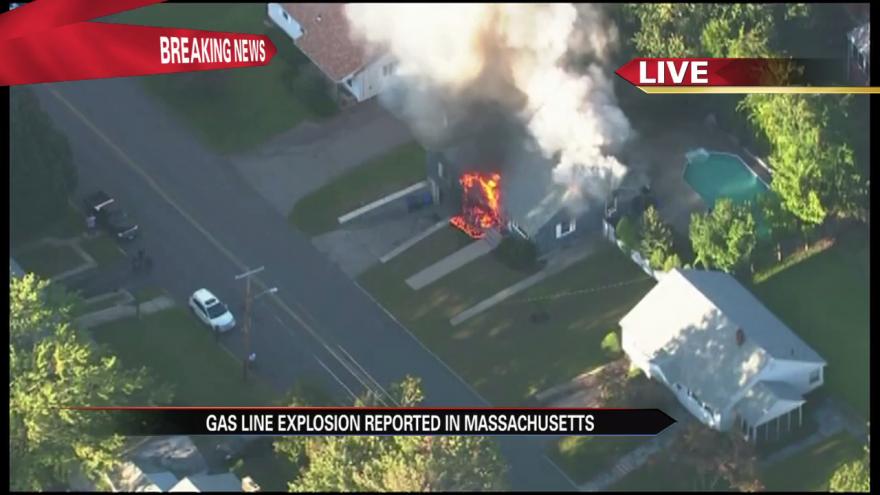 (CNN) -- Explosions and fires rocked nearly 40 homes and businesses in three Massachusetts towns late Thursday afternoon, leaving at least 10 people injured, one critically. The incidents may have resulted from an issue with gas service, officials said.

Explosions set structures on fire across dozens of blocks and forced evacuations in Lawrence, Andover and North Andover, Massachusetts State Police said. Not all gas had been shut off by Thursday evening and some of the lines were overpressurized, officials said.

"This has been an overwhelming event," Andover Fire Rescue Chief Michael B. Mansfield told reporters. "I have been in the fire service for almost 39 years and I have never seen anything like this in my entire career. ... It looked like Armageddon, it really did."

There was no immediate information available about the extent of the damage. "Far too early to speculate on cause" of the explosions, authorities said.

Lawrence General Hospital received 10 patients, one of whom was in critical condition and one listed as serious, according to spokeswoman Jill Halsey. One patient was transferred. Andover officials said a firefighter was among the injured.

Firefighters put out 35 fires in Andover, town officials said. The cities are north of Boston.

"Incidents are across a wide swath of dozens of blocks across Lawrence and North Andover," state police said via Twitter. There were at least 70 responses to fire, explosions and gas odor reports. State police said some neighborhoods were evacuated because of gas odors.

Columbia Gas earlier Thursday put out a news release saying it was upgrading natural gas lines in neighborhoods across the state, with a focus on enhanced safety features. Andover, North Andover and Lawrence projects were included.

Residents in the area who have service from Columbia Gas "should evacuate their homes immediately," state police said.

Gas lines were being depressurized by the company. The utility said its thoughts are "with everyone affected by today's incident." It said it was conducting safety checks and supporting first responders.

Officials were shutting down power in Lawrence, North Andover and Andover because of the emergency, state police said on Thursday evening. About 18,000 customers were without power.

The explosions and emergency response caused Amtrak to cancel four train routes between Boston and Maine. Passengers on three were being moved by bus.

A middle school in North Andover and a senior center in Andover were set up for evacuees, according to the agency. Andover officials asked residents and businesses in gas-serviced neighborhoods to evacuate. Schools are closed Friday in Lawrence and Andover.

Residence halls and academic buildings at Merrimack College were evacuated, according to Jim Chiavelli, chief of staff for the college president. Students were waiting outside buildings for the gas to be shut off.

Lawrence Mayor Dan Rivera estimated there are between 20 and 25 fires across the city, according to WCVB.

Gas service was interrupted for 250 customers in Lawrence last month "due to hit line by a third party," according to Columbia Gas.

The National Transportation Safety Board will send a team to the area on Friday.

Updated plotting of confirmed fires and explosions by MSP Watch Center. 39 locations confirmed thus far. Number will grow. New responses ongoing. Reminder: all residents of Lawrence/Andover/N Andover who have Columbia Gas must evacuate, as should anyone else who smells gas. pic.twitter.com/IwD4phgTfu