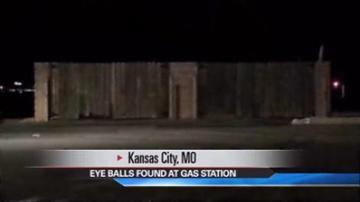 KANSAS CITY, Mo. — Police in Kansas City are investigating after a gas station clerk found a pair of eyeballs outside.

The worker spotted a cardboard box that was labeled "Keep Refrigerated" on top of a garbage bin.

Inside the box was a medical cooler which contained what she thought were human eyes.

Police later determined the eyes were not human.

The package was transported to the medical examiner's office to determine where the eyes came from.