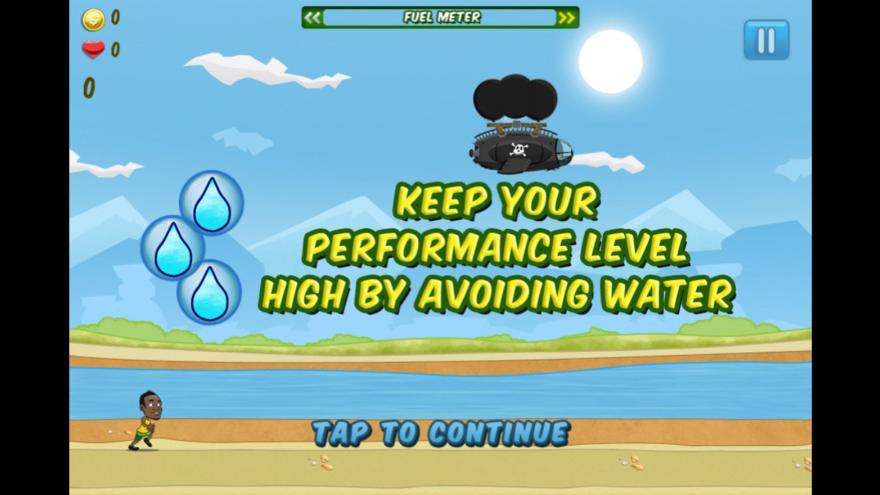 (CNN) -- The Gatorade Company will no longer be able to make disparaging comments about water, according to a settlement announced Thursday by California Attorney General Xavier Becerra.

The settlement stems from the company's free and award-winning mobile game "Bolt!" which came out in 2012 but is no longer listed in the iTunes store.

Instead it urges the player to "Grab Gatorade to fill your fuel meter."

The complaint alleges that Gatorade violated California consumer protection laws by making misleading statements about water, according to Becerra's office.

"Today's settlement should make clear that the California Department of Justice will pursue false advertisers and hold them accountable," he said. There was no admission of wrongdoing or liability by Gatorade as part of the settlement.

In addition to governing how the company depicts water, the settlement will require Gatorade to disclose endorser relationships in any social media posts. It will also prohibit the company from advertising its products in the media when children under 12 make up more than 35% of the audience.

Gatorade must pay $300,000 to the California Attorney General's Office, $120,000 of which will be used to fund research or education about the importance of drinking water and proper nutrition in kids and teenagers.

The Gatorade Company, a subsidiary of PepsiCo, did not immediately respond to a request for comment.

More than 2.3 million people downloaded the game, which was played 87 million times and "harnessed 4 million online fans," according to a 2013 presentation by marketing company Manning Gottlieb OMD. The company helped create the game and talked about its success after "Bolt!" won a marketing award.

The presentation says that "teen athletes often chose to drink water during practice because they thought it provided the proper hydration they needed, so we came up with an entertaining and competitive way to reinforce to teens that consuming Gatorade would help them perform better on the field and that water was the enemy of performance." The presentation has since been removed from the award site but was archived elsewhere.

The presentation also outlined various celebrity endorsements from the likes of former boxer Mike Tyson and pop singer Justin Bieber. About 73% of players came from the company's target demographic of 13 to 24 years old, according to the presentation.

"And more importantly," it said, "with 820 million brand impressions, it drove home the idea that Gatorade is better than water."

That's the problem, said Jennifer Harris, a food and marketing expert with University of Connecticut's Rudd Center for Food Policy and Obesity.

"Companies are finding that teens are more skeptical of classic advertising and traditional television ads. They tune them out," Harris said. That's why there are more product placements in movies, TV shows and video games. "It is a way to sort of deactivate the skepticism someone would have over a traditional ad.

"When this is disguised as entertainment, it distracts you, and the advertisement becomes more effective because your defense mechanism is lower," Harris said. "When the industry aims these messages at young people, it raises public health concerns."

Water should be a child's "initial beverage of choice as long as daily dietary caloric and other nutrient (eg, calcium, vitamins) needs are being met," according to2011 guidelines from the American Association of Pediatrics. "Water is also generally the appropriate first choice for hydration before, during, and after most exercise regimens."

Kids rarely ever need sports drinks, the association has said, and their use should be limited to when "there is a need for more rapid replenishment of carbohydrates and/or electrolytes in combination with water during periods of prolonged, vigorous sports participation or other intense physical activity."

The association's guidelines suggest that children should avoid "frequent or excessive intake of caloric sports drinks" because "intake can lead to excessive caloric consumption and an increased risk of overweight and obesity as well as dental erosion."

A 32-fluid-ounce bottle of Gatorade may contain as much as 56 grams of sugar.

With the rate of obesity more than doubling for US children and quadrupling in adolescents since the 1970s, many doctors have come to see sugary beverages as a threat to children's health.

Studies have shown the popularity of sports drinks among children has "grown exponentially." One study in 20 Minneapolis middle and high schools found that more than a third of the kids had a sports drink at least once a week, and kids who were athletic drank more. But many of the children were drinking them socially, something the pediatricians' association says should be avoided or restricted.