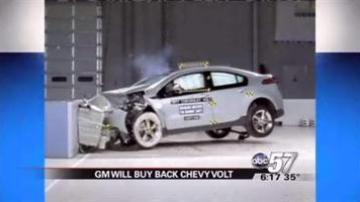 DETROIT -- General Motors said it will buy back any Chevy Volt from customers concerned about the electric car's safety.

The National Highway Traffic Safety Administration opened an investigation when two Volt batteries caught on fire just three weeks after the cars were involved in crashes.

GM expected to sell 10,000 Volts this year, but that's now out of reach. The company does expect to make that goal early next year.