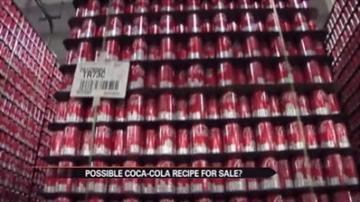 GEORGIA -- A Georgia couple says they have the secret recipe for one of the world's top sodas and they think it is the real thing.

They say they found the recipe for Coca-Cola at an estate sale.

Now they have put the document for sale on Ebay. It can be yours for $5-million.

Coca-Cola is not worried about its century old secret coming out. The company says it has the real secret recipe under lock and key.

"At least once a year, somebody shows up and says I have the original formula for Coca-Cola, how much do you want to pay me for it? We don’t need to pay them anything for it, because we have the only real one," said Ted Ryan, Chief Archivist at Coca-Cola.

Several years ago NPR's website actually crashed when it posted what the news agency said was the drink's secret formula.