Georgia Dome imploded after 25 years of use 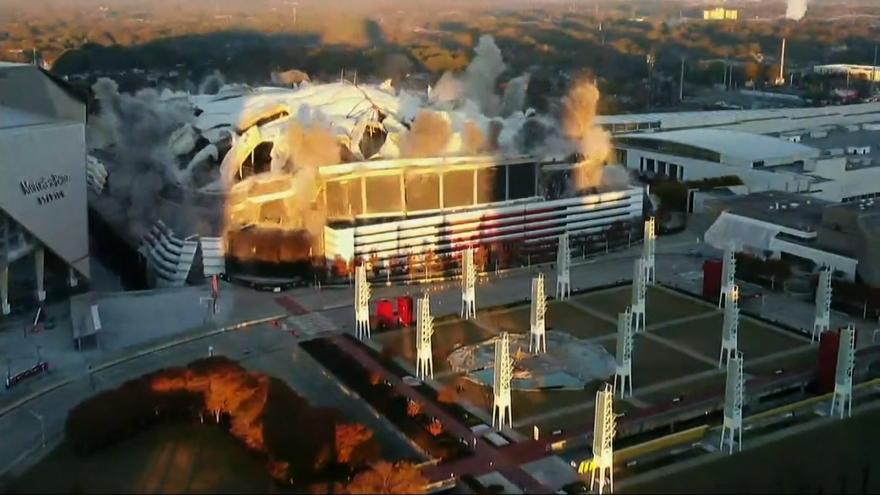 (CNN) -- The only facility in the world to host the Olympics, Super Bowl and Final Four has been reduced to rubble.

A little more than 25 years after opening, the Georgia Dome, former home of the Atlanta Falcons and the scene for several historic sporting events, was imploded Monday morning. The adjacent Mercedes-Benz Stadium opened this summer.

The blast occurred just after 7:30 a.m. ET. In the span of about 12-15 seconds, most of the structure collapsed, though parts of it remained upright.

Either the charges in the area didn't go off, or the blast wasn't strong enough, according to Georgia World Congress Center Authority spokeswoman Morgan Smith-Williams. The implosion team is inspecting what's left of the structure.

In the dome's place in downtown Atlanta will include a hotel, parking and green space. What will remain is a spot jampacked full of memories.

"As far as the stadium goes, for me it starts with the fans," Atlanta Falcons head coach Dan Quinn said. "That's the first thing you remember about a place, the enthusiasm of the fans and a city and what it brings to a stadium. That's what I think of, the fans, the city and the love they have for the team."

Major events and a natural disaster

Groundbreaking on the Georgia Dome began in November 1989 and work was completed in March 1992. When it opened, the Georgia Dome was the largest covered stadium in the world and featured the world's largest cable-supported fabric roof.

More than 1,400 events took place at the Georgia Dome in its short life span, bringing in 39 million guests.

It's been the home of the Falcons, Georgia State University football, the annual Peach Bowl and the Southeastern Conference Football Championship. It also temporarily was the home court for the NBA's Atlanta Hawks in the late 1990s while nearby Philips Arena was being built.

The stadium housed two Super Bowls. In 1994, the Buffalo Bills fell to the Dallas Cowboys in Super Bowl XXVIII, losing their fourth consecutive title game. Super Bowl XXXIV in 2000 had a dramatic finish, with Tennessee Titans wide receiver Kevin Dyson being tackled just short of the goal line to give the St. Louis Rams the victory.

One of the most iconic moments in US Olympic history took place at the Georgia Dome in 1996 when an injured Kerri Strug, later diagnosed with torn ligaments in her ankle, courageously nailed her second vault to help the American women win gymnastics team gold for the first time. The 1996 "Dream Team" won gold in men's basketball, while the American women's basketball team won gold as well.

The Georgia Dome hosted three NCAA men's Final Fours, with Maryland (2002), Florida (2007) and Louisville (2013) taking those national championships. It also was the host for the 2003 NCAA women's Final Four, with Connecticut winning the title.

Additionally, the history of the Georgia Dome is tied to two natural disasters. In January 2006, the Sugar Bowl -- usually held in New Orleans -- was moved to the Georgia Dome because of damage from Hurricane Katrina. The West Virginia Mountaineers stunned the Georgia Bulldogs 38-35.

On March 14, 2008, a men's college basketball game between Alabama and Mississippi State went into overtime, and it might have been a lifesaver for fans at the dome. A 3-point shot by Crimson Tide guard Mykal Riley forced the extra period, keeping spectators from heading toward the exits. A tornado hit downtown Atlanta a few minutes later. There was extensive damage in the area, including at the Georgia Dome, which forced that game and the rest of the SEC tournament to finish at Georgia Tech's Alexander Memorial Coliseum.

The Georgia Dome wasn't the original home for the Falcons -- the team played at the now-demolished Atlanta-Fulton County Stadium from 1966-1991 -- but it has seen the most success.

Atlanta had 10 winning seasons and reached the playoffs nine times at the Georgia Dome.

The NFL playoff history started in January 1999 when the Falcons defeated the San Francisco 49ers 20-18 in the divisional playoff round. Atlanta would go on to advance to its first Super Bowl, losing to the Denver Broncos.

Atlanta hosted the NFC Championship Game in 2013. But the home team missed out on reaching Super Bowl XLVII, with the Falcons losing to the 49ers, 28-24.

In January, the Falcons defeated the Green Bay Packers 44-21 to advance to Super Bowl LI, ending their tenure in the Georgia Dome with a historic win.

"For the fans, for this city and for the teams that rocked this place for 25 years, we felt your energy from the very beginning," Quinn said after the victory. "So it's only fitting, at the NFC Championship Game, the last game played here, we felt that, too."