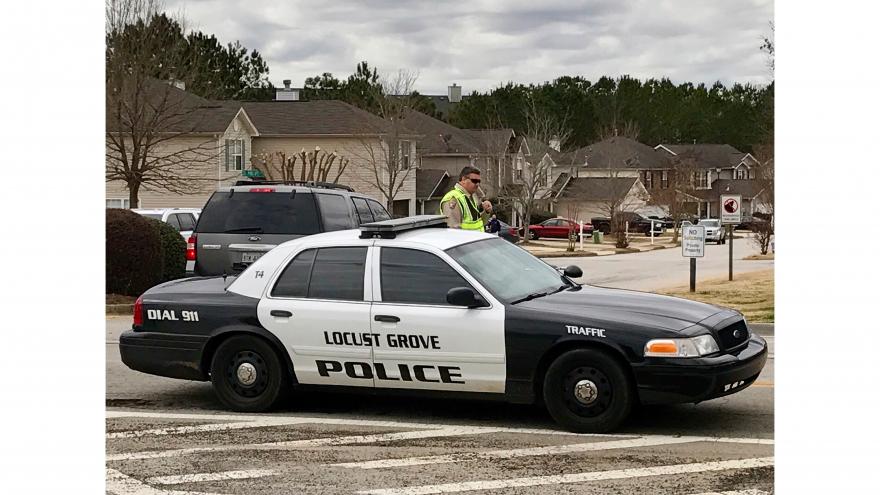 (CNN) -- A Georgia police officer was killed and two sheriff's deputies were wounded Friday while trying to arrest a man, authorities said.

The shooting occurred in Locust Grove, a small town about 35 miles south of Atlanta, when the two Henry County deputies went to a residence to serve a warrant on a man for failure to appear in Locust Grove Municipal Court, Henry County Sheriff Keith McBrayer said at a news conference.

The deputies called for backup and a Locust Grove police officer arrived.

While trying to make the arrest, an altercation occurred during which the three officers and the suspect were all shot, McBrayer said. The suspect, who was not immediately identified, died, he said. McBrayer did not say who opened fire.

Eight other law enforcement officers have died of gunfire this year, according to the Officer Down Memorial Page.

On Wednesday, David Sherrard of the Richardson, Texas, police was killed while responding to a shots fired call at an apartment complex. A suspect is in custody.

On Monday, Micah Flick of the sheriff's office in El Paso County, Colorado, was killed while investigating a vehicle theft. Three other law enforcement officers were shot and injured during a struggle with the suspect in Colorado Springs, authorities say. The suspect was killed.

Flick was the third officer killed in Colorado since the beginning of the year.