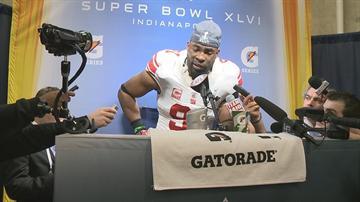 The Giants out shined the Patriots for the second-time in just four years for the national title. New York won their meeting in Super Bowl XLII 17-14.

Eli Manning was named MVP for the second Super Bowl against the Patriots on Sunday.

After the game, former Notre Dame defensive end Justin Tuck joked that Manning stole the title from him for the second time
Many Irish fans wouldn’t disagree after Tuck’s star performance back in the Hoosier State.
He helped force New England quarterback Tom Brady to throw the ball away in the first play from scrimmage. His impact didn’t end there. Tuck helped bring back the Giants who trailed the Patriots into the final minutes of the game.
“I just told them to go out there and finish. This is what we’re built for. This is what we’ve been working for all year. Through all the roller coasters that we’ve had this year, we’ve got 50 some seconds to be world champions,” Tuck said he told his team.
Tuck added three tackles and two sacks for New York in the championship game which was played just a few hours south of his Alma mater Notre Dame.
Tuck said he has many great memories from playing at Notre Dame, and feels lucky to have so many great opportunities.
“When I left there, you know, you miss a place like that, and being here in this place I’ve been lucky. I’ve been very lucky. Playing at Notre Dame which I think is the best university alive, and playing for the New York Giants which I think is the best franchise,” said Tuck.
After Sunday, not many would disagree, unless you’re traveling back to Boston.
Tuck played for the Irish from 2001-2004.
Share this article: