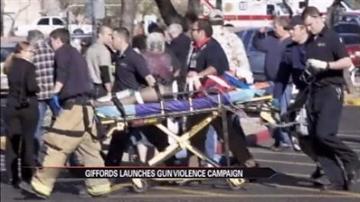 A crowd gathered in Tuscon Tuesday morning to ring bells at the exact moment the gunman opened fire.

Six people died in the shooting, 13 others including Giffords were hurt.

She's using the anniversary to launch an anti-gun violence campaign.

Since Giffords' shooting there have been 11 mass shootings in the US.