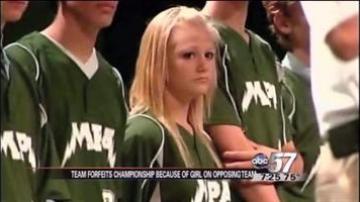 MESA, Ariz.-- A high school baseball team was supposed to play in their state championship game, on Friday, but it was canceled after the other team forfeited.

The team forfeited because the Mesa school has a girl on the team.

Paige Sultz-Back really wanted to play softball, but there was no team, so she went out for the boy's baseball team.

Making the cut, she helped the team to an undefeated season, and it's only their first year.

The Mesa team said they respect their opponent's stance, but it is unfortunate a championship was won and lost by a forfeit.