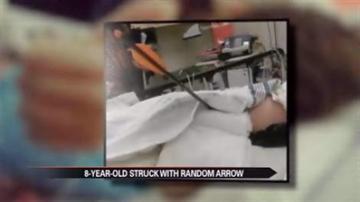 CALIFORNIA -- An arrow fell out of the sky and pierced the leg of an 8-year-old girl who was on a school trip to the University of California, Berkeley.

Nadine Hairston was sitting on a life sized model of a fin whale outside the Lawrence Hall of Science Tuesday morning when the arrow struck her.

She said she felt the shock in her leg and then tried to run but couldn't move. That is when she saw the arrow stuck in her leg.

"I don't know if they were aiming for me or just the whale, I have no idea," said Hairston.

Luckily the arrow only punctured a fleshy part of her leg, missing all major arteries.

The girl was taken to the hospital where the arrow was surgically removed.