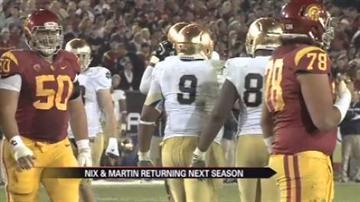 Martin and Nix decided to return rather than enter the NFL draft.

Even though they made the official announcement Monday, Nix said he's had a hard time convincing his mom he's staying at Notre Dame.

"I told her before I told Coach Kelly but she didn't believe me. I joke around with her all the time about it like, 'Yeah I'm leaving mom,'" said Nix.

Coach Kelly also announced that running back Cierre Wood will wait to see his NFL evaluations before he makes a decision about returning.