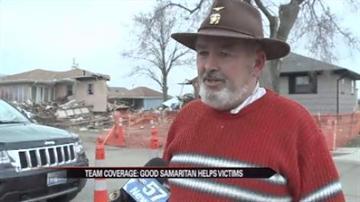 SOUTH BEND, Ind. -- A man known for his generosity is stepping in to help the families displaced by Sunday’s plane crash on North Iowa Street. The pilot stopped by the neighborhood to give the homeowners some of his own money.

He says his home caught fire once and he’ll never forget how South Bend came together to help him out.

"Our house burned down one time and everyone was there to help us. You are devastated, you have lost everything,” said pilot David Kriegel.

"I came here not to observe the accident, but to hand out some checks hopefully to the homeowners just to help them out,” said Kriegel.

As a longtime pilot himself, Kriegel says it is a blessing that the plane landed flat and didn't plow through the whole block.

"I’ve flown since 1964. I’ve flown light jets and heavy jets like that and it is just a miracle that no one was killed on the ground. That is very fortunate,” said Kriegel.

Having gone through a loss of home himself, he understands the financial strain and he hopes everyone will join him in helping the Iowa Street homeowners out.

"Find out who to donate to. Just help them out because they would be here to help you out,” said Kriegel.

This isn't the first time Kriegel has given money to help victims of tragedies.

He is also a member of veterans of foreign wars and he is known around town for helping out veterans and their families.