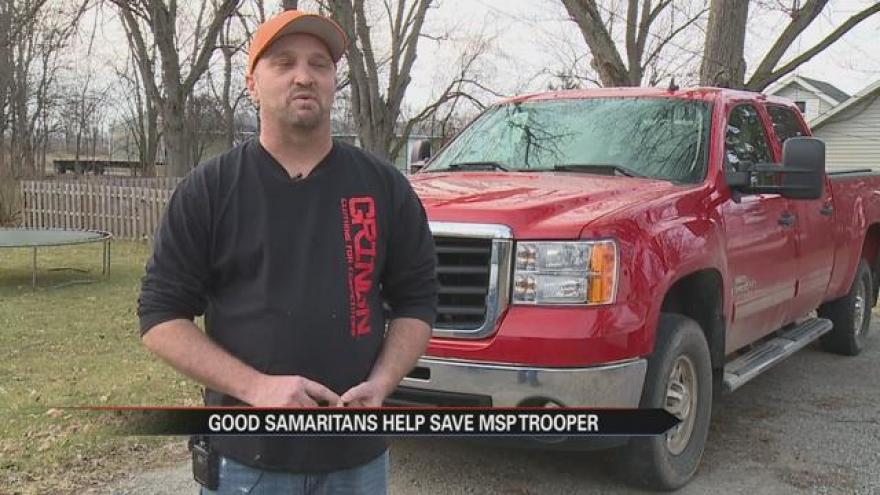 It started as a pretty dull morning for Jerry and Lisa Burnham of Berrien Springs. Heading to South Bend on US 31, that changed when a police chase whizzed by them.

Tpr. Garry Guild with Michigan State Police was attempting to stop a man on a stolen motorcycle.

The motorcycle lost control and crashed near the Niles- Buchanan exit. The 21-year-old driver got up and charged towards Tpr. Guild.

As Tpr. Guild was wrestling with the suspect, a vehicle stopped and the motorcycle driver’s 19-year-old brother got out and also started attacking Tpr. Guild.

Police say the suspects were punching Tpr. Guild and attempting to choke him.

“It was kind of scary to see him doing that and then to see two of them,” said Lisa.

With encouragement from his wife, Jerry pulled over along with another passerby from Plainwell.

They ran to Tpr. Guild’s rescue.

“We grabbed a hold of him and we got his arm out from around his neck and pretty much pinned him to ground until the police could get there and they got the guy under control,” said Jerry.

The Good Samaritans held down the suspects until additional officers arrived and arrested the two suspects.

“Well they are here to help you so the least you could do is return the favor. There’s already enough bad things that happen. Cops are accused of a lot of things, but they’re not all that way. I would think any good person would do it,” said Jerry.

While Jerry is modest, his wife considers him a hero.

“I think he’s a hero for doing that because you never know what could have happened,” said Lisa.

Tpr. Guild was seen and released from the local hospital for minor injuries.

Police say their investigation so far connects the suspects to several breaking and entering. The two are being held at the Berrien County Jail awaiting arraignment. Their names will be released once they are arraigned.