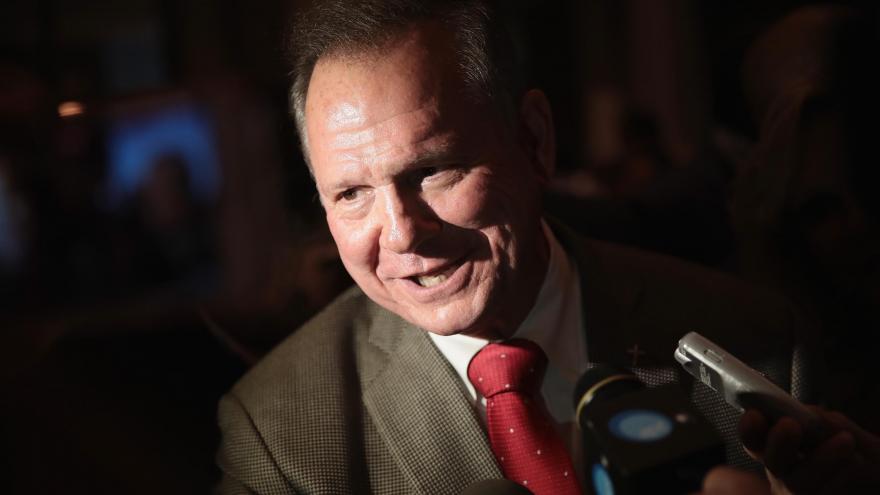 (CNN) -- Senate Majority Leader Mitch McConnell and other Republicans say Roy Moore, the GOP nominee in Alabama for a US Senate seat, should step aside if an explosive Washington Post report that accuses him of engaging in sexual conduct with underage women is true.

"If these allegations are true, he must step aside," McConnell said in a statement.

"The allegations against Roy Moore are deeply disturbing and disqualifying," said Sen. John McCain of Arizona in a statement. "He should immediately step aside and allow the people of Alabama to elect a candidate they can be proud of."

Senate Majority Whip John Cornyn told CNN, "I find it deeply disturbing and troubling," later adding, "It's up to the governor and the folks of Alabama to make that decision."

Maine Republican Sen. Susan Collins tweeted, "If there is any truth at all to these horrific allegations, Roy Moore should immediately step aside as a Senate candidate."

And National Republican Senatorial Committee chairman Cory Gardner said in a statement, "If these allegations are found to be true, Roy Moore must drop out of the Alabama special Senate election."

The Washington Post alleged Thursday that Moore initiated a sexual encounter with a 14-year-old girl when he was 32. Three other women also told The Post that Moore pursued them when they were between the ages of 16 and 18 and he was in his early 30s.

Moore told The Post: "These allegations are completely false and are a desperate political attack by the National Democrat Party and the Washington Post on this campaign."

Moore released a statement in a series of tweets later Thursday attacking the media and his political opponents -- and vowing not to "give up" amid calls to step aside.

"The forces of evil will lie, cheat, steal ---- even inflict physical harm ---- if they believe it will silence and shut up Christian conservatives like you and me," he said in one tweet.

Can Moore be replaced on ballot?

The Alabama Secretary of State's office told CNN that Moore or the Alabama Republican Party can withdraw his nomination for the Senate seat, but there's no process to replace him outside of a write-in candidate.

"We do not have the process of how the state party would decide that yet. Should the party decide to do withdraw his nomination, the state chairman will notify the Secretary of State," the office told CNN.

In an interview on CNN's "Erin Burnett OutFront," Alabama Secretary of State John Merrill explained there is no way to remove Moore from the ballot because of a 76-day legal window around changes to the ballots themselves.

"The code in the Constitution of Alabama is very clear about his candidacy," Merrill said. "And that is that Judge Moore will remain on the ballot as the Republican nominee."

Merrill said he would honor a request made by the Alabama GOP if the state's Republican Party moves to disqualify Moore.

If Moore's name is withdrawn, there is no process to replace a candidate with another candidate's name. That means, if the Alabama Republican Party wanted to try to get another Republican elected, it would have to be a write-in on the ballot.

If Moore's nomination is withdrawn, the state canvassing board will not certify votes for him. So should he received the most votes after a withdrawal, it will not be counted.

The December 12 special election is to fill the seat that was vacated by Jeff Sessions when he took the Attorney General position in President Donald Trump's cabinet.

He has campaigned on a platform of placing Christianity at the center of public life. In 2003, Moore was removed as state Supreme Court chief justice for refusing to take down a Ten Commandments monument from the state supreme court building. He was re-elected to the job, and then ousted again in 2016, when he refused to follow the US Supreme Court's ruling legalizing same-sex marriage.

Sessions was last re-elected in 2014, meaning the winner of the December vote would serve in the US Senate through 2020.

The allegations against Moore

Moore approached Leigh Corfman while she was sitting outside a wooden bench with her mother, and offered to watch Corfman while her mother went inside for a child custody hearing, the Post reported. He was an assistant district attorney at the time.

"He said, 'Oh, you don't want her to go in there and hear all that. I'll stay out here with her,'" Corfman's mother, Nancy Wells, told The Post. "I thought, how nice for him to want to take care of my little girl."

Moore asked Corfman for her number, called her a few days later, and then he picked her up around the corner from her house in Gadsden. He then drove her 30 minutes away to the woods, called her pretty and kissed her, the Post reports. During a second visit, Moore took off her shirt and pants and he removed his clothes. He touched her over her bra and underpants, she told the Post, and guided her hand to touch him over his underwear.

"I wanted it over with -- I wanted out," she told The Post. "Please just get this over with. Whatever this is, just get it over."

Corfman then asked Moore to take her home, which he did, she recounted to the paper.

"Judge Roy Moore has endured the most outlandish attacks on any candidate in the modern political arena, but this story in today's Washington Post alleging sexual impropriety takes the cake. National liberal organizations know their chosen candidate Doug Jones is in a death spiral, and this is their last ditch Hail Mary," Armistead said.