GOP VP pick to take stage at the RNC 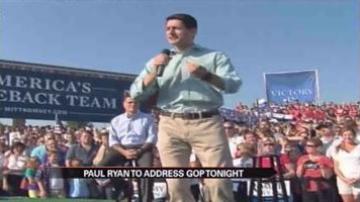 TAMPA, Fla. -- GOP vice presidential candidate Paul Ryan will take to the stage at the Republican National Convention on Wednesday.

The vice presidential candidate has been in Congress for 14 years.

Ryan also is a darling among fiscal conversatives.

A recent ABC News Poll found voters are split on Mitt Romney's running mate. And several say they have no opinion at all.

Ryan's speech Wednesday night will be the biggest of his political career.

"Millions who may not know a lot about Paul Ryan, other than the headlines that they've read -- are going to get to know Paul Ryan the way many of us know him: a serious policy thinker," said Florida Senator Marco Rubio.

Romney took a break from the convention on Wednesday.

He spent the day in Indianapolis talking with veterans.