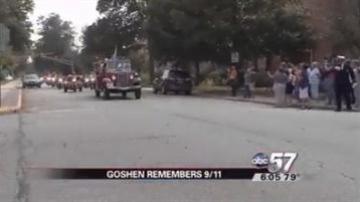 GOSHEN, Ind -- More than 700 motorcycles filled the streets in Goshen today to mark the 10th anniversary of the attacks on September 11, 2001.

The riders ushered into town a new memorial while over a thousand people stood by.

The town's new 9/11 memorial honoring those lost in the attacks from the New York Fire and Police Departments was also on display.

Many participated in the event including the Goshen Fire Department. We spoke to the Fire Chief and he told ABC 57 he's proud that his department could be part of such a special tribute.