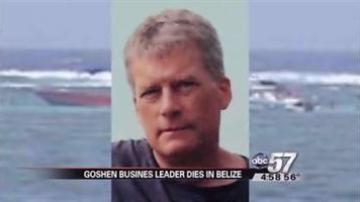 GOSHEN, Ind. -- Well-known Goshen businessman, Roger Burger, drowned while he was on vacation in Belize.

That's according to the Associated Press.

The 54-year-old man was carried away by the huge waves and drowned.

He is the owner of Inventure, an electronics engineering and manufacturing company.

He died on Tuesday while snorkeling with his wife and son.

Burger and an Italian woman both died during the snorkeling trip.