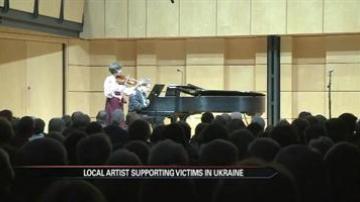 GOSHEN, Ind. -- One local college is helping thousands of people overseas in Ukraine. Goshen College held a benefit concert Saturday evening to raise money for people affected by the conflict in Ukraine.

Minutes before show time, Goshen College Music Professor Solomia Soroka and her husband Arthur Greene did one final run through.

They weren’t getting ready for just any concert; this one is special.

That is because it will benefit Soroka’s family and friends back in Ukraine.

“We were scared for our friends and our family. So it has been a very intense period,” said Soroka.

In the last several months hundreds of Ukrainians have been killed.

“We had friends and relatives on that square where people were getting shot,” Greene explained.

But Soroka is putting those horrific stories and images aside—so the audience can see another side of her country.

And while the audience got to hear special Ukrainian selections, they were also helping those in need with their donations.

“We want to help people that are injured and the families of those who have been killed,” said Soroka.

The college teamed up with the foundation People for Maidan, created by the Ukrainian Catholic Church and they will make sure the money is put to good use.

Soroka said, “They specifically are working with the injured. Also people who suffered post traumatic stress and need psychiatric help and also they gave money to little children who are orphans because their fathers were killed.”

If you are interested in donating to this cause, you can reach out to Goshen College, as they continue to raise money for those in Ukraine.