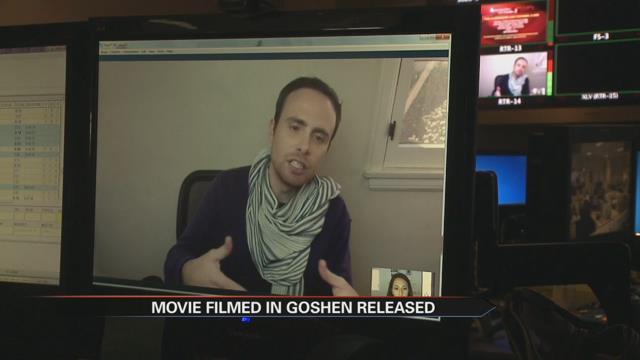 A movie filmed in Michiana by an Elkhart County native is now available for you to watch. It’s a big accomplishment for not only those who made the film but also the community of Goshen.

Distinguishable shots of Elkhart County and the city of Goshen play a major role in the film ‘Sand Castles’.

“It [the scenery] is basically a character in the movie. It played a huge impact. I don’t think we could have shot the movie without shooting it here,” says Jordon Hodges who wrote, produced, and starred in the film.

Tuesday morning, ABC57 talked with Hodges on Skype. He is a Goshen native who now lives in Los Angeles.

After a short trip to Northern Indiana, Hodges convinced the director to shoot the movie in Michiana in 2012.

“They [the film crew] absolutely fell in love with it [Northern Indiana] and when a movie comes to town it’s exciting and people want to be a part of that,” says Hodges.

The Elkhart County Sheriff’s Department lent its uniforms and squad cars to help with the storyline.

The movie is about a family whose young daughter returns home after being kidnapped.

Four years since filming, ‘Sand Castles’ has won multiple awards and on Tuesday became available for anyone to watch in the comfort of their own home.

“It’s fun to be able to look at those things and see the places and people you recognize and be able to say ‘ahh that’s where I go’. It’s sort of neat to see it on a film,” says David Daugherty, President of the Goshen Chamber of Commerce.

Daugherty says having movies filmed in the community not only creates local excitement but also generates business interest.

“We have talked about do we put together a small film commission that really promotes Goshen as a place to come and film and make a movie,” says Daugherty.

These plans are very preliminary but students at Goshen College are already feeling the affect of the film industry hitting their city.

“When films go on location to film they aren’t bringing a bunch of people from LA to work on the film they rely on local talent,” says Kyle Hufford, a Film Production professor at Goshen College.

Hufford says a Goshen College film student worked behind the scene on ‘Sand Castles.’ Many more students were able to participate as extras.

Hodges says this local support is tempting him to return to Michiana.

“I definitely would like to go back and shoot in Northern Indiana again. I just think you can get something there that you really can't get out here in Los Angeles,” says Hodges.

Hodges provided the links and instructions below on how to buy or rent ‘Sand Castles’.

Search for "Sand Castles" on your cable box for On Demand! (Though Sand Castles is available on many cable providers, it is not on all of them. We hope you will choose from one of the other Digital HD options above.)

A DVD has not yet been released. But if you would like to be notified when a DVD is available, please send an email to [email protected] with your name and email.