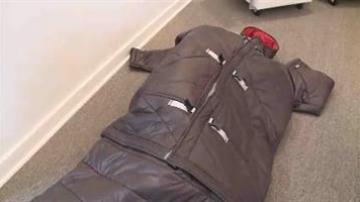 GOSHEN, Ind.-- A Goshen company is taking recycling to a new level.

GDC  produces a wide variety of products and now it’s working together with General Motors and a small non-profit from Detroit to make coats for the homeless.

The whole program began as one Detroit woman’s school project.

She was introduced to General Motors for recyclable materials and GM turned to their supplier, GDC. Now, a once dying automotive giant, a local company and a recent college grad are paired up and giving hope to the homeless.

The coats aren’t exactly trendy, but then again, for a jacket made with recycled car parts, they aren’t too bad either.

“It was really just based on designing to fill a need and that’s how the coat was designed,” said Veronika Scott, the CEO and founder of The Empowerment Plan, the non-profit organization creating the coats.

They’re coats with a cause.

They’re made by homeless moms from a Detroit shelter.

They’re made for the 20,000 homeless people on Detroit streets. And, Scott is the artist/engineer behind it all.

“A coat is a coat but the important part is the system behind it,” explained Scott. “What it’s made out of, who makes it, how it’s done, where it’s done- at this point in time, we have to pay attention to those things.”

The material the coats are made out of, comes from right here in Goshen.  GDC manufactures a product called Sonozorb for General Motors.

“The Sonozorb is used in several locations within our vehicles,” said John Bradburn, the Manager of GM’s waste reduction efforts. “[Around] the door area it insulates the sound, to provide for a real nice cabin experience.”

As it turns out, the Sonozorb isn’t just great for insulating sound, it’s also good at retaining heat.

“What we did is take the waste that we normally recycle and reprocess it into a thermal insulation for the homeless coats,” explained Chris Miller, GDC’s Vice President of sales and engineering.

“We needed something with loft,” explained Scott. “Something so that the people on the streets wouldn’t lose their warmth and body heat through the jacket, but something that would give the jackets enough loft to retain their heat.”

The Sonoform looks and feels similar to goose down filling, it’s lightweight, but also fluffy and soft.

The jackets also double as a shoulder bag and a sleeping bag.

“A lot of people ask us why we use Velcro instead of a zipper,” said Scott as she manipulates the coat into it’s sleeping bag form. “First, we wanted the person sleeping in the coat to have the ability to get out of the sleeping bag as fast as possible in case of an emergency or any other situation. Second, Velcro doesn’t break. If a zipper breaks, like a tooth on the zipper, the person would have to come back to us to fix it. And if they don’t, the coat or sleeping bag is rendered useless.”

For GDC and GM Scott’s program is an opportunity to practice environmental responsibility while also giving back to the community.

“it’s part of our corporate mission,” said Miller. “It’s part of who we are as a company.”

And for Scott, the partnerships are a means to make her humanitarian vision a reality.

“It’s been amazing, it’s been a process and I hope to work with them for a very long time.”