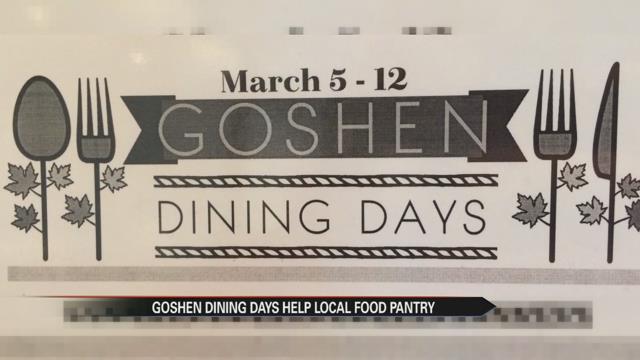 The second annual “Goshen Dining Days” event is taking place in 14 restaurants and eateries throughout Goshen this week.

“It’s really great for all the restaurants in town,” Goshen Brewing Company Head Chef Jesse Shoemaker said. “It’s a fun thing to do; it’s a good cause, so yeah, it’s a lot of fun.”

Shoemaker’s restaurant is participating in the event for the first time. If you order one of two three-course specials being offered this week, 10 percent of that sale will go to Goshen’s non-profit “The Window.”

More than one dozen other Goshen restaurants and eateries are offering similar deals this week.

Shoemaker outlined the specials at his restaurant:

“So it started with caramelized Brussels sprouts that are tossed in a Thai vinaigrette dressing,” Shoemaker said. “And then your choice of either our smoked pulled pork sandwich with a Carolina barbecue sauce and fennel cole slaw on a brioche bun, or for vegetarians, we also have an onion sandwich, which is grilled red onions with rosemary, tomatoes, aioli, greens on a brioche bun, smoked gouda.”

Shoemaker added, “And then for dessert, there’s a chocolate cardamom truffle cake, which has like a coconut crème sauce over the top of it.”

“This goes for a good cause so I’ve done this before,” Hoadley said.

Shoemaker said the event is a great reason for people in Michiana to come experience different Goshen Restaurants.

“For people who haven’t been into Goshen before, it’s a great way to try out a number of things at different restaurants.”

The complete list of restaurants and eateries participating is as follows: