Goshen family robbed at gunpoint in home; suspects at large 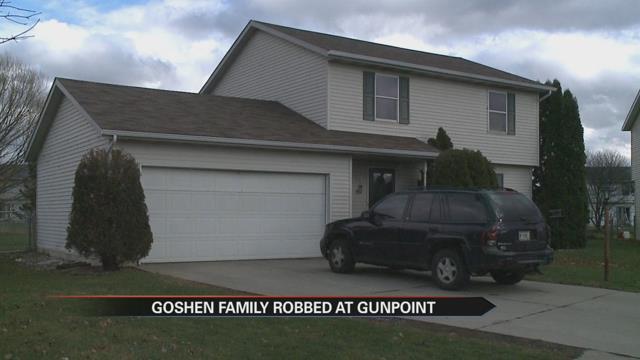 A Goshen family was robbed at gunpoint in their home Sunday night and police are on the hunt for suspects.

Veronica Rodriguez, who lives a few houses down from where the robbery happened on Bayberry Drive, said there is never crime in her neighborhood.

“[The robbery] just amazes me because we leave the door open most of the time!” Rodriguez said.

Rodriguez and her family have lived on Bayberry Dr. in Goshen for 12 years.

“Kids are always just playing around,” Rodriguez said. “Everybody knows everybody.”

That’s why an incident Sunday night surprised her.

According to Goshen Police, as many as three armed criminals entered a home on the 700 block of Bayberry Dr. Sunday night around 9 p.m. through an unlocked front door and robbed the family inside at gunpoint.

The family was too shaken up to speak on camera, but they spoke off camera.

“When I heard about it, I was shocked!” Rodriguez said.

The neighborhood where the incident took place is a family-filled community dotted with playground sets, basketball hoops and open garage doors.

“Somebody walks into your house! And you’re there with your family!” Rodriguez said. “That’s nuts to me! That’s just like unbelievable.”

The armed thieves took money, televisions, cell phones and even one of the family’s cars to get away in.

Rodriguez said her family is now looking into adding more locks at their house.

“We’re definitely gonna be a little bit more on the careful side,” she said.

As of Monday evening, Goshen Police had not made any arrests and they did not have descriptions of the suspects.

The family said, off camera, that it was two tall men wearing hoodies and a woman who robbed them.

The missing car is a silver, 2011 Chevrolet Malibu with the license plate 954MBF.

Goshen Police are also searching for Ana Lebbin because they believe she may have information regarding the home invasion. Police say she could be in the South Bend area. If you know of her whereabouts, call Detective Nick McCloughen at 574-537-3804.