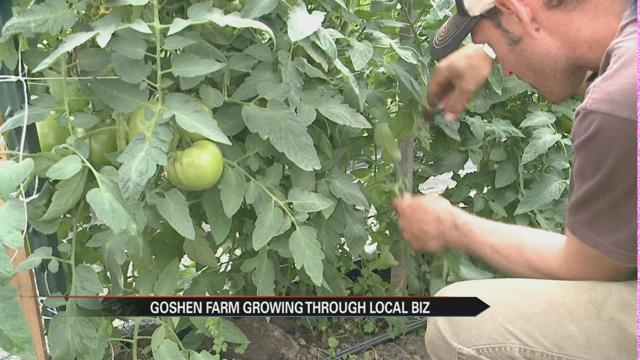 A Goshen farmer is experiencing growth as more restaurants in the area buy locally. Ben Hartman of Clay Bottom Farms says because the food he grows only travels about 10 miles from his farm to various restaurants, the quality is fresher.

Hartman says every year more of the food they grow is sold to restaurant owners in downtown Goshen.

“We are the behind the scenes farm for a lot of these local restaurants we have weekly contact with the chefs,” Hartman said.

Hartman bought his five acre farm in 2008 and based his business off a trend known as micro farming.

“If you love farming, which we do, you are going to have to get creative,” said Hartman.

“90 percent of our food ends up with 10 miles of the farm so that means we can deliver food just about as soon as it's picked,” said Hartman.

“The brewery we really want it to be an asset to the community and part of that is buying as many of our ingredients from the community,” said Shoemaker.

Hartman attributes his success to these new relationships between farmers and chefs.

“Micro farming is a trend and it's projected to continue. As we learn the chefs and how they like to prepare foods and what their menu looks like. And as they learn us when garlic harvest happens and so every year they can include more and more local foods on their menus. And from what we hear customers appreciate it,” Hartman said.

Hartman also sells  his produce at the Goshen Farmer's Market. Shoemaker commented on price saying the difference between buying local and non-local varies. Sometimes it costs less and sometimes it costs more, but he says the quality is worth it.
Share this article: