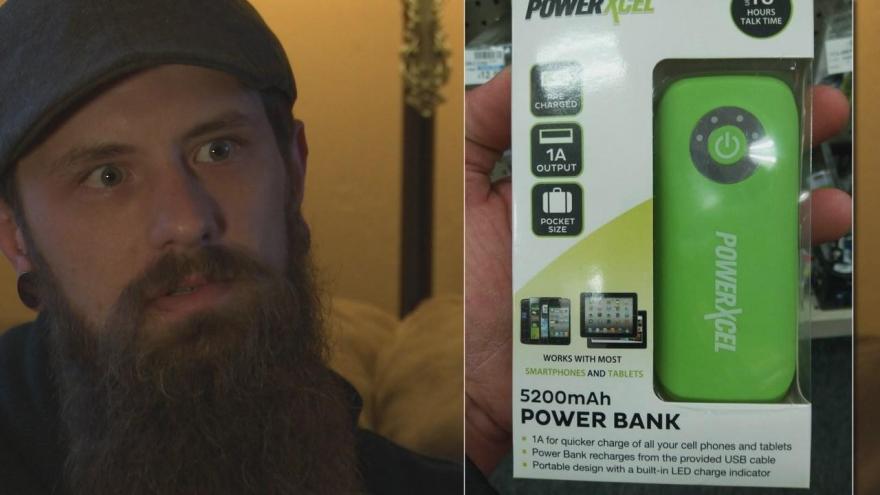 It’s a product horror story that a father in Goshen never thought would happen to him.

“You see things like this on the news and you read about it,” said Brandon Seitz, the victim’s father. “You just never think it would happen to your family or someone you hold so dear.”

Seitz was horrified his family’s situation was like the many stories he’s heard before.

He says the PowerXcel portable charger he purchased over a year ago malfunctioned in a dangerous way while most of his family was sleeping.

“Early hours in the morning around 3 am or so, it exploded and shot, I’m guessing battery acid that was inside, whatever substance in the cell battery,” he said.

This once functional product was charging on his son’s desk when it burst into flames.

“He woke up literally on fire,” said Seitz.

He says when it exploded the flames raced across his son’s clothes and bedding, even burning his son’s right arm.

“Everything up his forearm, they said would be a partial burn which is more like blistering,” he said. “He’s completely terrified that he’ll end up with these scars for the rest of his life or that an infection could set in and the situation could get worse.”

Brandon took his case to the CVS store where he says he bought the charger.

Friday, he reached out to the store’s corporate headquarters and he says he won’t stop until the product is off the shelves for good.

“If there’s any potential for anybody to get hurt the product needs to come off the shelf and they need to be held accountable for the injuries it’s caused my son at least,” said Seitz.

Seitz says he is not planning on taking legal action, for now.

He says his main concern is his son's recovery.

ABC 57 News has reached out to the CVS store where the product was purchase.

The manager said he could not comment and encouraged our reporter to reach out to corporate headquarters.

ABC 57 News has contacted the corporation and is still waiting for a response.