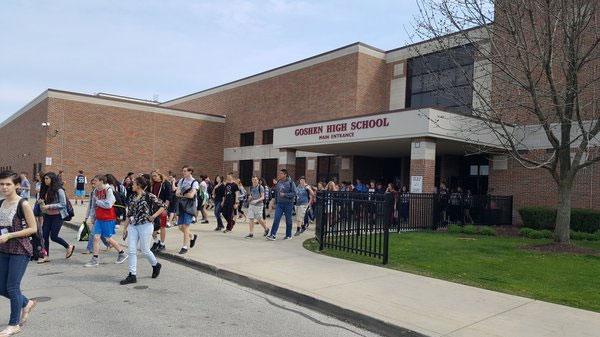 Goshen High School students were briefly evacuated Wednesday morning because of a suspicious package, according to Goshen Police.

Around noon, a teacher noticed an unknown package under a bush near the Whiteman wing.

Goshen High School administrators decided to evacuate students to the baseball field and Administration Center field as a precaution.

Goshen Police set a perimeter and a K-9 was brought in to inspect the package.

The K-9 "hit" on the package as containing electrical wires or components.

The Elkhart Police Department bomb squad was contacted to possibly help dispose of the package.

It was determined by police the package was actually a light placed there by an electrical contractor.

The contractor told police he left it under the bush so it was out of the way while he went to lunch.

Students were allowed back in the school around 12:50.

ABC57's Brian Dorman was at the school during the evacuation and all-clear.

I was walking into #GHS when I was told there was an evacuation, I thought it was a joke at 1st. pic.twitter.com/aAjlaSdSAa

#Breaking: everyone told to move farther away from #GHS as emergency crews investigate suspicious package. pic.twitter.com/RFzRYQbK3k

Media has been asked by police to gather in a certain area. Expecting an official update soon. #GHS pic.twitter.com/pKjJsFHO1Q

You can see the student gathered near the parking area across from the main entrance. #GHS pic.twitter.com/U8xniXfnZx

Still an active scene here at #GHS as we wait for official word on what's going on. pic.twitter.com/jsXBfqXXUS

Another unmarked police car just pulled up to #GHS with lights flashing. pic.twitter.com/oV77VcsXzX

#Breaking: evacuation has ended. Students allowed back inside. #GHS pic.twitter.com/r22tfqlGBL

Babies are safely on their way back in. #GHS pic.twitter.com/ytP8s5G4to