Goshen High School students frightened because of an attack rumor 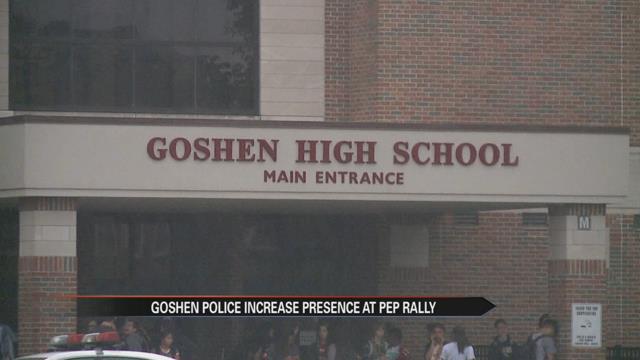 On Friday, students at Goshen High School were alarmed because of a rumor swirling through their hallways. Three Goshen police cars were lined up at the main entrance while a student revealed what he heard lead to all of this.

The district released a statement about a potential incident planned during today’s pep rally that lead administrators to increase security, even though they believe all students were going to be safe.

Wyatt Fisher, a freshman, heard the rumor during his 7th period. Fisher said there was talk about some sort of attack perhaps involving weapons.

According to Goshen Community Schools that threat was determined not to be credible. Police even searched the building.

Even still, that 9th grader said he was scared and thought school leaders could’ve done a better job calming any fears.

“I thought if they would have told us what was going on and what the rumors were about it might have made some people more nervous, but they could’ve assured us they were going to make us safe and make sure nothing bad happened to us,” said Fisher

The district confirmed any updates concerning this would be posted on the website, but at this point nothing new has been released.