GOSHEN, Ind.—Home and business owners across northern Indiana are opening their doors to strangers as part of a nationwide grassroots renewable energy event called the National Solar Tour.

“It’s the most efficient way to power your home. There’s also something self-sufficient about that,” Goshen homeowner Alan Ediger said.

Ediger lives in Goshen in a 1,150 square foot house that is powered by a 7.2 kW, 20 panel, ground-mounted solar array in an effort to reduce his own carbon footprint.

During previous years, Ediger attended open houses throughout the area to learn more about solar energy, as he was once a bit skeptical of the idea.

“In this area in particular and I was one of them, with the cloudy skies during the winter time here, you automatically think there’s not enough sun here to do my house but you need to look at it on a yearly basis,” Ediger said, explaining that his solar energy is a part of a net metering program, which allows energy to be gained during the summer and used during the winter.

While his home and roof saw a little damage, Ediger’s weather resistant solar panels managed to hold up against an early summer hail storm. 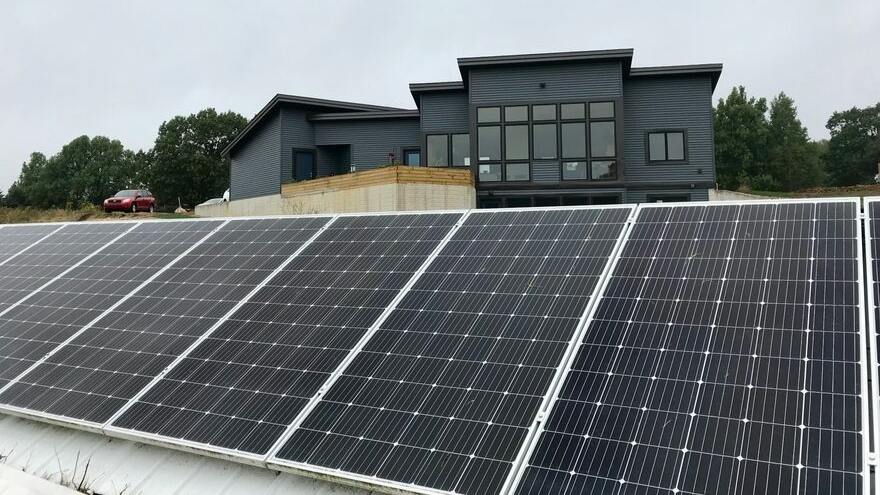 Ediger had the solar energy system installed in 2017 with the help of the organization Solarize Northern Indiana initiative and since then, he says he has seen significant cost savings. He also sought help from the initiative to file for a federal solar tax credit.

“There is enough sun in northern Indiana to make it practical. There is some upfront cost but the long term benefits are there,” Ediger said.

Ediger says that Solarize Northern Indiana gave him tools and resources, like contact information for qualified solar array installers, to get the project done.

Now, Ediger says his grid-tied home is designed to be net zero, meaning that it will hopefully run entirely on solar energy, producing as much renewable energy as it creates during a single year.

On Saturday, October 5 from 2 to 5 p.m., Ediger will open his doors to strangers who are interested in learning more about his solar energy usage.

Ediger hopes that by sharing his use of solar energy with others that they too might consider making the switch.

Just south of Ediger's own solar array, Goshen College has two sites participating in the tour this year, including the college’s recreational fitness center and the on-campus College Mennonite Church.

Nationally, over 800 homes and businesses will be hosting solar open houses on October 5 and 6, which are free and open to the public.

Take a look at this map to find an open house near you.

Solarize Northern Indiana is an initiative that works across the region to support the use of solar energy.

In 2017, the Solarize initiative resulted in 97 new solar projects in the South Bend and Goshen areas.

The initiative is running two more workshops this year, on October 10 in Argos and on November 7 in New Carlisle to share more information about solar energy.